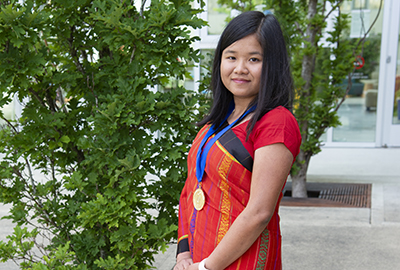 Born in a small village in northeastern India, Reema Chakma grew up in poverty, facing daily struggles along with her family. She and her family of five lived in a small studio apartment with no air conditioning, and at times did not have water, power or many other basic needs. Still, her parents worked hard in local factories to give their children opportunities they did not have growing up.

Although it was a challenging time for her family, Reema attended a local school and did well until she entered high school. With mounting financial stress at home, her academic career began to suffer. “After a while, I decided to start working to help my family financially,” she said. “My mother especially was so hard-working, and I wanted to do whatever I could to help out.”

She reluctantly quit her studies to work in a local call center. It was challenging work, but gave her the ability to make money and help her parents.

Reema met her husband online in 2014, shortly before he joined the United States Army and entered basic training. Although communication was difficult during this time, they made a point of writing each other letters before meeting in person almost a year later. They married in 2016 and Reema became a permanent U.S. resident in Sept. 2018.

A few months later, she got a job working at Starbucks as a barista. Although she loved her job, it didn’t take her long to consider going back to school to finish her education.

Her husband had heard about Pierce College, and recommended she look into our General Education Development (GED) program for adult learners.

“I connected with a wonderful GED advisor at Pierce, who guided me on what classes I should register for as an adult learner,” Reema said. “I was a GED student for maybe five or six months, and was doing very well in my math classes. My professor at the time, Bill Orrange, would ask me every day what my ultimate goals were. I didn’t know because I was just trying to finish my GED. But he kept asking, and it got me thinking. He inspired me to finally register for the GED test. I ended up passing all my subjects and got a good score!”

Prof. Orrange also let her know about the college’s Transitional Education Scholarship designed for students moving from the GED program to college-level courses. “I applied for the scholarship, and I got it!” Reema said. “That really motivated me to continue my higher education at Pierce College.”

With great pride, Reema was able to transfer into college level courses while still working as a barista. Some quarters during her journey, she even worked two jobs after joining the Tutoring Center at Pierce. “I just love my tutoring job,” she said. “I love helping students with math problems, and that’s what inspired me to pursue a career as a math professor at a community college. I chose community college specifically because it has had such a great impact on my life. I want to contribute to society in the same way by helping other students figure out their own career pathways.”

Many people contributed to Reema’s successful journey at Pierce College, from professors and advisors to mentors she met along the way. “However, I wouldn’t have reached this point in my life without the support of my husband,” she said. “He gave me all these opportunities which I never could have imagined while living in India. He has helped transform me into a motivated, career focused woman, and overall a better person.”

Reema graduated with honors from Pierce College in 2022, and has already been accepted into the University of Washington as well as Columbia University in New York City. She plans to continue her education to ultimately earn her Ph.D. in mathematics.

“My life’s greatest victory is transferring from a GED student into a traditional college student and getting accepted into an Ivy League university,” Reema said. “I am more motivated than ever to continue working toward my dreams.”